The proposed site for Project Two, Homeground, is a mirror image of Project One’s Fullers Close in many ways:

We felt therefor that we understood the Feasibility process sufficiently to manage it ourselves to a great extent.  Homes England agreed with us and were generous with a grant of £72,000 for Feasibility, compared to £20,000 we spent on Project One. We were thus able to tackle the risk elements in much greater detail, earlier in the project:

Prior to commissioning Project Two, the Stroud DC Heritage Planner was consulted, due to there being six Grade II listed buildings in the vicinity. One of these, the Grade II* Gazebo, had, in 2016, been instrumental in winning, at Appeal, a refusal for a commercial housing site. We felt it would be hypocritical of ECLT to propose building too close to protected properties. The most relevant is Alkerton Court and it was agreed that no building could take place in an apron to the south of this, which Stroud DC regarded as a respectful setting for the 18th Century building.

This vindicated our decision to use Homeground, eliminated a perceived risk and led to the subsidiary decision to build in the western half of the field, by the motorway: 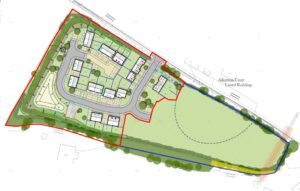 We had confidence in the principles of acoustic attenuation by early 2020, with the acoustic fence already built at Fullers Close giving better-that-expected results. The enhanced project budget had been planned to allow for at least four rounds of acoustic modelling, to verify progress of successive architects’ and engineers’ designs.

In parallel, we had surveyors and a geotechnical consultant undertake a full-scale ground analysis, partly because building acoustic bunds (to save on the cost of specialist fencing) obviously requires quite a lot of soil to be shifted about. The conclusion was very satisfactory:

The engineer was able to design an acoustic bund two metres high on the motorway side, tapering down to one metre along the northern and southern boundaries. The 2.5 metre fences on top would be similar to or slightly smaller than at Fullers Close, which Stroud DC Planners had approved in 2019.

Building in the western side of the field gave us two quick wins identified by the Highways consultant:

Stroud Valley Project (SVP) conducted a winter and summer survey of the flora and fauna which raised no issues (no bats or greater crested newts for instance). The field has been grazed for centuries and so has no ecological interest – anything we did by way of new trees or ponds would be an ecological gain. The mature hedges contain a good variety of bird life and so we will be looking to improve the density and quality of the northern and southern hedges where there has been die-back of elm trees in particular.

The Topographical survey confirmed our layman’s impression that the gentle slope to the south west would ensure simple gravity drainage from all properties. The engineer accordingly has put the attenuation pond for storm water in the south west corner with the pumping station close by to handle the foul water.

ECLT Board approved the Feasibility Report for Homeground V 2.0 to HE 5 5 2021 on 3rd March 2021 and it was submitted to Homes England on 5th March 2021. Upon approval, this released the final milestone payment from the CHF grant of £7,188.