Acceptance of the Feasibility Report and the under-pinning Phase 1 Technical Reports signalled the start of the Pre-Planning Application Phase. This is a recognised step in the Planning process, known as “Pre-App” where designers and planners can discuss outline ideas, gradually approaching a scheme that looks reasonable.

“Acceptance of Feasibility” meant that:

Throughout the Pre Planning Application Phase the key officers in Stroud DC and Gloucestershire CC had to be kept up to speed with technical findings and consultation with Parish Council and all parishioners undertaken.

We knew from the Feasibility Report that several technical aspects were already non-contentious: 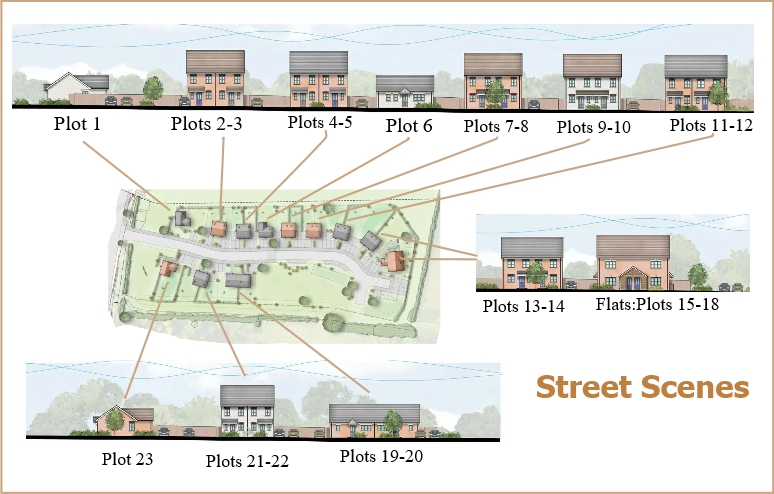 The Phase 1 Ground Penetrating Radar Survey had not been able to locate all the services. These were regional, rather than local pipes and ducts which each of the utilities insisted on plotting more accurately:

The fibre duct was further east than we had expected from historical plans and the utility would not allow us to have garden fences within 3 metres. This squeezed the houses closer to the motorway, changed the internal road design from a loop to a “J” shape and forced the highway exit to the east.

The high-pressure water main affected the number of houses we could plan on the motorway side and reduced the length of the acoustic berm (meaning a higher fence in the north-east).

The combined results meant that the layout changed from the Feasibility Report version (below left) to the December 2017 version displayed at the AGM (below right). 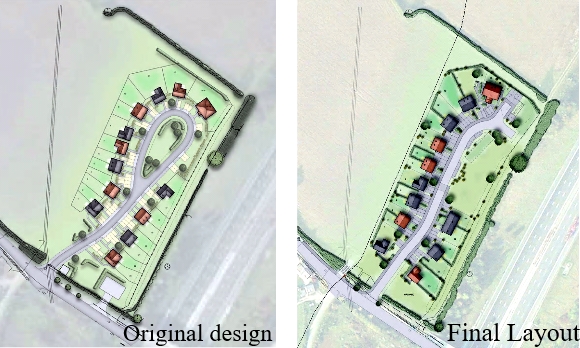 Acoustic Design was always in the mind of the architect: we had already agreed with Stroud DC to move 3 bungalows and the block of flats to the motorway side of the site for acoustic reasons.

Discussing the final acoustic design with the planners, it was agreed to have a one-metre high earth bund with a 2.5-metre acoustic fence on the motorway side.

Adjustment of the car spaces for plots 19 to 23 brought a “shadow” of quieter space in the front gardens for these houses whilst plots 1 to 18 had quiet areas in their back gardens. These “quieter” areas are below 55dBA, a World Health guideline.

Nationally, less than half our homes ever achieve this and our own measurements showed that very few places in Alkerton were ever below 60 dBA. People in Eastington know all about motorway noise

By January 2018, all the technical hurdles have been passed and all that remains is to finalise three legal agreements:

The first two are included in a Conditional Contract between all three parties, where “conditional” essentially means dependant on planning permission. The third is what will govern ECLT’s relationship with Aster, both for the build phase (paid for by Aster, including grants) and the letting, maintenance and management of the site as 23 affordable homes to rent. Eastington homes for Eastington people